ROUND TWO : 2nd VOTE ON THE LISBON TREATY/CONSTITUTION. 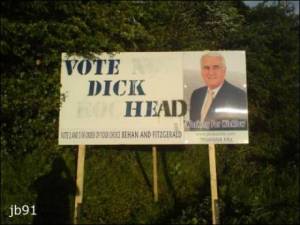 From this (in mid July 2008)….. “It is far, far too early to be talking about a referendum or about some specific policy to go forward (after the 12th June 2008 ‘NO’ vote to the Lisbon Treaty/Constitution) , that’s not the way to formulate a policy in response to a referendum….”

….to this – ‘A second referendum on the Lisbon Treaty would “ultimately” be required and ratifying key elements by legislation was not a viable option, Minister of State for European Affairs Dick Roche said at the weekend…’

A few days ago , John from this blog was on Newstalk Radio talking about matters political : one of the issues he raised was the strong rumour in political circles that the wasters in Leinster House were preparing to hold a second vote on the Lisbon Treaty/Constitution on the same day as the vote on the EU elections in June 2009 – this possibility was dismissed out of hand by the Presenter of the show as “unlikely” . It now appears that Dick Roche has been sent out by his political masters to ‘fly a kite’ regarding this issue ie ‘soften-up’ the public to expect such a second vote in the near future . This blog done what little it could in calling for a ‘NO’ vote in the first Lisbon referendum – 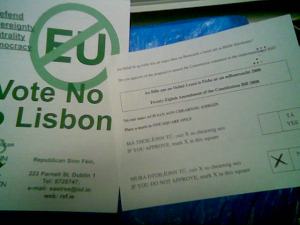 – and will do so again when the political incompetents in Leinster House try , yet again, to secure an even cosier future for themselves in Europe by fostering a second Lisbon vote on the electorate in this State. So much for the mantra which those politically useless leeches throw at Irish Republicans as often as they can – ” You must respect the will of the people….”
Sharon.