THE IRA / RESISTANCE ON ALL FRONTS/ THE UNDAUNTED WOMEN IN ARMAGH.

There have been more so-called ‘security force’ deaths and less civilian deaths from IRA activity than for a long time : furthermore , as the ‘Criminal Damage Payments’ bear testimony , the reduced level of bombings has not reduced the damage caused .

Also , the contrasting numbers of deaths of PIRA operatives compared to those in the ‘security forces’ show the IRA is losing less men for every death they inflict on the enemy than ever before in this campaign . In terms of enemy kills against the IRA the picture is even bleaker for the British – in 1979 and 1980 , premature explosions , not British Army or RUC bullets , killed four of the six dead IRA men , and all the figures available point to more effective activity by the IRA .

While 1978 and 1979 were ‘good’ years for the IRA , 1980 so far has been a ‘bad’ one : increased enemy undercover operations have hampered the IRA , whose leadership has admitted that five out of six operations are now aborted due to surveillance and frequent arrests and seven-day detention orders of ‘middle management’ IRA leaders have disrupted co-ordination and communication . One such IRA activist was told by the British Army officer who arrested him that his orders were – “Disrupt Them!” …….

RESISTANCE ON ALL FRONTS…….
IRIS talks to a spokesperson authorised to speak on behalf of the Irish Republican Army.
From ‘IRIS’ magazine , July/August 1982.

IRIS : ” In view of current events in the Middle East , could you reiterate your position on the Palestinian struggle ? ”

IRA : ” We support the PLO’s right to their own country . We morally support their position and we see in the Israelis’ attempt at genocide a similarity to the Nazis’ attempted genocide of the Jews in the 1930’s and 1940’s . That is to say , there is a marked similarity between Israel’s present stance and Hitler’s ‘final solution’ . The hypocrisy of the super powers – the Reagan administration particularly – and of the EEC governments , is evident and we condemn it.” 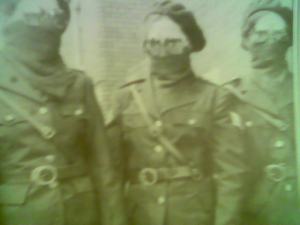 Armagh Jail left its mark on the women : many were not only experiencing at first hand the repressive nature of the Orange State but also discovering the strength that lies in being united and organised , and the warmth and solidarity of the struggle .

One of the women POW’s said – ” Quite a few of us have now dropped off , got married , had families . But you will still see them at marches . They’re still here . Of the 40 on my Prison Wing I can only think of five that disappeared from the scene completely.” And some of the women were of course to experience jail again – in that same prison , but in totally different conditions .

After the last internee left in mid-1975 , between 60 and 70 sentenced republican prisoners were left in Armagh Jail . They were all moved to ‘B’ Wing while ‘A’ Wing was closed off and made ready for those prisoners coming in after March 1st 1976 – the date on which special category status was no longer applicable . One or two women had been arrested just before that date and were brought to Armagh Jail at the beginning of April 1976 : the POW’s with political status fought hard to get those women in with them . Pauline Deery was one of those women , and is now the last POW to receive ‘special category’ status in Armagh Jail , where she is in a unit on her own in ‘B1’ Wing…….