THE IRA / BLACK PROPAGANDA / THE UNDAUNTED WOMEN IN ARMAGH. 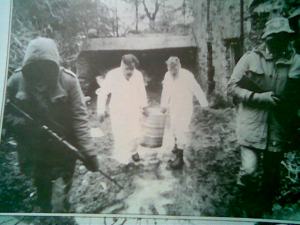 For an Economic Resistance Campaign to be really successful it clearly needs to get into the business of making demands on the State , both North and South of the border . Building campaigns around the demand for jobs or better housing will lead , say the republican ‘traditionalists’ , to a de facto recognition of Leinster House and whatever institution it is that Humphrey Atkins can devise in the North of Ireland to replace Stormont . So far an uneasy compromise has been reached which allows for agitation in the South but only glorified social work in the North .

The most significant change in the ‘Eire Nua’ document has come in the present differing attitudes of the IRA Army Council and Sinn Féin to the core of the 1972 document , that is – federalism or the creation of strong Provisional government in Ireland when the British withdraw . Underlying Federalism was an implicit hope that it would mollify Northern Unionists and persuade them that , however un-realistic * the chances of re-unification , the Provisionals didn’t really bear them any ill will .

The Provos were even prepared to give them a large measure of self-government should the distant dream * of re-unification be realised . The Provisional leader most closely identified with Federalism is of course Dáithí Ó Conaill -as the Director of Publicity of the IRA between 1972 and 1975 , Ó Conaill spoke more often of the need to build a ‘United Ulster’ than a ‘United Ireland’ , and even banned * the latter phrase from Provisional vocabulary for a while . (* ‘1169…’ Comment : What rubbish ! To claim that any Irish Republican leader would seek to have the term ‘United Ireland’ banned within that organisation is simply ludicrous ! Certain descriptions ie ‘Northern Ireland’/’the Province’ etc are self-censored by republicans themselves as they are geographically (and morally) inaccurate , but the term ‘United Ireland’ would not have been self-censored , never mind internally “banned”. The author’s use of the terms “un-realistic” and “distant dream” speaks volumes of where he is coming from ie a slightly nationalist perspective rather than a republican one…) 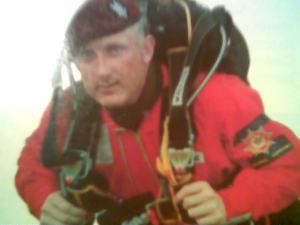 British Army Captain John Colin Wallace.
First it was the Maguire family – claiming they had been wrongly convicted of bombings in London on faulty forensic tests and circumstantial evidence . Then the Birmingham Six were shown to have been the victims of another miscarriage of British ‘justice’ . Now , in the most bizarre case of all , a former British Intelligence officer , who served in the North of Ireland , has claimed that he was framed for a killing he didn’t commit .
British Captain John Wallace , now serving ten years for manslaughter , claims that his conviction was part of a plan to destroy his credibility because he knew too much about covert operations in Ireland – on both sides of the border . Frank Doherty talked to Wallace and to another former British Intelligence officer , Captain Fred Holroyd , who is lobbying politicians to re-open a case which is as potentially embarrassing for the British Secret Service as the Wright case in Australia has proved to be.
From ‘MAGILL’ magazine , December 1986 .

Before he died , Jonathan Lewis had told his wife that he was worried about his business and said that if anything happened to him she was to “look out for” ‘Mr Y’ – the business associate mentioned at the trial . Now Amanda Metcalf , Holroyd’s witness , is convinced that Colin Wallace is innocent – ” I feel terrible ,” she says , ” I am also scared , because if Colin Wallace is innocent there could be someone walking around looking for me because of what I saw…”

British Captain Fred Holroyd’s quest to prove Wallace’s innocence has brought him to another witness – an angler who was fishing on the River Arun around midnight on the day of the killing . This fisherman saw a man searching the riverbank with a torch and claims that the man was not Colin Wallace .

The British spy’s solicitor , James Morgan-Harris, has been trying to have the case re-opened since Wallace decided to go public shortly after seeing Fred Holroyd on TV . The solicitor , James Morgan-Harris , has been concentrating on the forensic evidence , which he believes is crucial because the case against Wallace was largely circumstantial : forensic tests on the body of Jonathan Lewis after it was pulled from the River Arun would have shown how many drinks he had taken and , if the barmaid at the ‘Golden Goose’ pub is right – that the dead man was drinking there at a time when police say he was in Wallace’s car boot – then those tests would have shown that he had more than one drink . But , despite the anomalies in the whole affair , the British Home Office has refused requests from the solicitor to have the case re-opened . Due to the ‘Irish link’ , perhaps…….

The women POW’s in Armagh Jail wrote – ” Easter 1981 : Thomas Murtagh was appointed Governor of this prison . The anti-republican policy was reinforced with greater vehemence . We were in the coming months to experience greater hardships than those created by Governor George Scott. When the hunger-strike ended on October 3rd (1981) , there followed from the 5th October onward a 28-day ‘breathing space’ . This was enforced by James Prior in the hope that within that time we would reconsider our position , end the protest and comply with the system .

During the 28 days no loss of remission was to be imposed as a penalty for breaches of prison rules which arose from the protest . After the 28-day reprieval period we had decided to continue our protest , but agreed that five women would go ‘into’ the system as an exploratory exercise to discover which position would produce the greatest effect : working to achieve our aims within the system or outside it and it became apparent to us that the former strategy would enable us to strike at the very heart of the issue .

Throughout the following year of 1982 a few more women prisoners infiltrated the system while an adequate number maintained the protest , a strategy which created even greater problems for the prison administration .The administration had to contend with the protest , and an even more alarming situation which had been quietly developing under their very noses since the infiltration exercise . Governor Thomas Murtagh reacted as we believed he would – lashing out with the heavy-handed treatment . Daily , women were charged with petty offences which ensured solitary confinement , lock-ups , loss of visits , parcels and remission . The women who had ventured into the system received the worst of this treatment ; they had consolidated their position , formed a structure and grasped every opportunity to advance company policy . In response , Murtagh not only meted out the most severe punishments to them , but also used emotional blackmail…….”