THE IRA / THE KITSON EXPERIMENT / THE UNDAUNTED WOMEN IN ARMAGH. 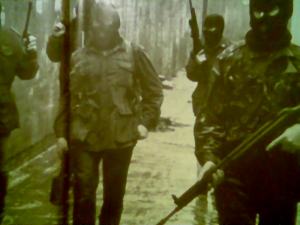 We can make the occupation of the North extremely expensive * – present costs are running at £1000 million annually and of course we will be hitting at their soldiers continually and causing their morale to be so low that they will find that they are incapable of maintaining any sort of order in the North ** . ”

( * ‘1169…’ Comment : and “extremely expensive” it surely must be for Westminster , as the PIRA are now a Westminster-funded armed militia acting as a “bulwark” against republicanism / ** : how ironic that that same organisation , the PIRA , are now paid assistants in trying to insure that “order” – albeit British ‘order’ – is maintained in the Six Counties!)
(MORE LATER).

Active support for the British Army of occupation in Ireland from the British press has on occasions been so obvious that it gave rise to jokes like the one quoted by Roger Faligot, which is doing the rounds in Irish press circles – ” I never remember which one is which : The Observer is MI6 and The Sunday Times is MI5 . Or is it the other way around ? “

The history of the ‘Peace People’ is admirably traced : as early as 1971 Frank Kitson had dreamed up the creation of ‘a movement for peace’ which would stimulate the political isolation of the IRA from the population of the Northern ghettos , on the lines of a similar tactic that had already been used in Vietnam and Algeria .

The tragedy that actually sparked off the formation of the ‘Women’s Peace Movement’ in August 1976 is also examined . Contrary to the story put out by the British Army within an hour of the incident , only British soldiers fired shots . IRA Volunteer Danny Lennon was already shot dead at the wheel of the car when it careered into the Maguire children . Moreover , according to various statements , including those of the late Mrs Maguire , and to indications that filtered down from the post-mortems (the findings of which the authorities have always declined to reveal) her children had been hit by British Army SLR bullets before the car struck them . Such realities did not of course prevent the British cynically manipulating for political ends the initially emotional response that occurred .

I have really only managed to skim the surface of an excellent , information-crammed book . Get it and study it.

On the ordeal of prison visiting , Marion Coyle’s mother says – ” We leave Derry at 3am and arrive in Limerick at 10am after seven hours of travelling on the PDF minibus. When we finally got into the waiting room it could be an hour before the prison Screws will search us and bring us over to see Marion . Then you are under the strict supervision of two Screws and aren’t allowed to discuss the conditions in the jail .

Our Marion has not been out for exercise in well over a year and because of the ruling I can’t even ask her how the solitary confinement is affecting her for fear that my visit will be ended .

At the end of the visit , it’s another seven hours back to Derry . We feel no wiser , no happier , but I know in my heart that Marion is suffering an unnatural ‘justice’ at the hands of a Free State bent on revenge.”

2 Responses to THE IRA / THE KITSON EXPERIMENT / THE UNDAUNTED WOMEN IN ARMAGH.