‘FULL HOUSE’ ON THE CARDS , THANKS TO SOCCER !

“They arent an official supporters club but more of a group of friends having a function..”

“Anyway, Liverpool and Everton supporters were always renown for not having the same violent antipathy towards one another that you find in other cities. It’s certainly not like Glascow!”

“There are a few of us coming over from Aberdeen for this, Arrive on Friday morning, Can’t wait for it to be honest! Great Work and Hail Hail…!”

“There are a group coming over from Aberdeen purely to support a new CSC. We were invited over by one of the lads in the club who used to stay in Aberdeen. Looking forward to it and the weekend in finglas….”

An unexpected ‘result’ . Of sorts! The above quotes are taken from a thread we started on this site, to help friends of ours promote a function they have organised (see below) : if you have an opinion , feel free to join in . If you want a good night out , then read on…. 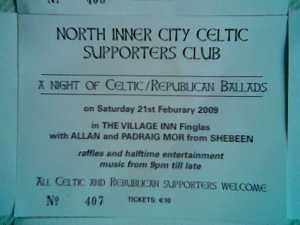 ‘Mad Kevin’ and the lads and lassies that he hangs around with are fantastic supporters of Republicanism and have , on more than one occasion, gone out of their way to attend gigs organised by the Republican Movement in Dublin : so now it’s pay-back time!
As stated on the above-pictured ticket , a ballad session featuring Allan and Padráig Mór from Shebeen will be held on Saturday 21st February 2009 in The Village Inn, Finglas, Dublin. A raffle will be held on the night and ‘halftime’ entertainment has been organised. Doors open at 9pm and admission is €10 per person.
Kevin and that particular ‘Celtic Crew’ are a lively bunch, to put it mildly (!) so a good night is guaranteed. This blog will be represented on the night , even if we do have to pay full price at the door 😉 … !
If you’re in Dublin yourself on February 21st next , see you there!
(One of the Organisers for this Celtic ballad night , Kevin , has asked that a contact mobile-phone number be made available for those wishing to inquire re ticket availability etc .
That number is : 085-8376208.)
Thanks!
Sharon.
( Post Script : my own knowledge of those type of sports is limited to being aware that rugby is a game played by men with odd-shaped balls…. 😉 )