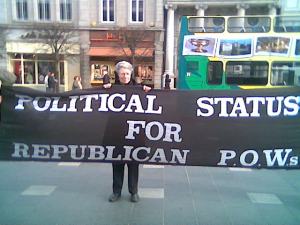 …..the usual monthly picket for Irish political prisoners was held at the GPO in O’Connell Street ; the starting time , which was set for 1.45pm , was brought forward one hour to allow some of the participants to take part in the ICTU-organised anti-pension levy/’golden circle’ protest which was also being held in Dublin on that afternoon , with the remainder of the 30-odd group remaining at the GPO. 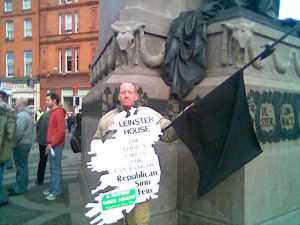 ‘LEINSTER HOUSE – THE GOLDEN CIRCLE YOU CAN BANK ON!’ 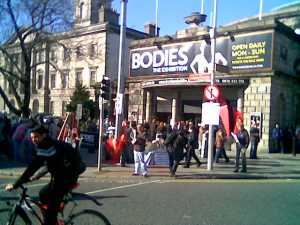 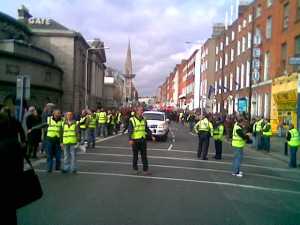 Getting ready to move off.

As stated above , Republican Sinn Féin members and supporters took part in the ICTU-organised anti-pension levy/’golden circle’ protest march through Dublin city centre: we were proud to be part of the almost 200,000 people (including on-lookers , who lined the entire parade route , clapping and cheering) and were the first political organisation to ‘set-up shop’ in the city that day – RSF members first assembled at 11.30am at the Parnell Monument , facing the Ambassador Cinema , and held their ground there until 3pm . Incidentally , the lead banner passed us at that monument at 2.05pm and the very last banner passed us at 3.05pm !

‘Ballad Session’ sign outside ‘The Village Inn’ pub in Finglas.

And finally : we finished up the day by having a few drinks and a good yap with our friends from the ‘North Inner City Celtic Supporters Club’ at the fund-raising ballad session they had organised in ‘The Village Inn’ in Finglas last night , and had a ball! It was a fantastic way to finish-off a busy day , and Kevin and the Crew spoiled us rotten – we had the best seats in the house , table service and some hot food . In fact it was so good that it was after 4am this morning before I got home , and I can still hear the ballads and the Celtic Anthems in my poor head ;-)…. !
Back to the leaba now for an hour or two for me : click-off gently when you’re finished , and I’ll be in touch during the week!
Thanks for reading!
Sharon.