THE IRA / SPIES UNDER A SPOTLIGHT / TEN YEARS IN ENGLISH JAILS. 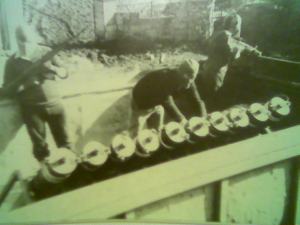 ED MALONEY : “What are the reasons for attacks on UDR and ex-UDR men when most Protestants in the North view those attacks as sectarian? “

IRA : ” In the RUC Constabular Gazette of June 1979 it was admitted that the UDR and RUC Reserve were the eyes and ears of the British Crown Forces in the North of Ireland . We don’t shoot anyone because of their religious beliefs . There have even been a few Catholics in the UDR killed by the IRA , there was one killed by an IRA landmine at Castlewellan this year . We have given notice to UDR men that if they contact us and assure us they are no longer members of the UDR we will not touch them .

The problem has been because of the difficulties the UDR has in recruiting members because of declining morale ; the turnover has been so high and occasionally our intelligence has been mistaken and we have shot by mistake former members . In rural areas it is the UDR and RUC , not so much the British Army , which is repressing our people so our attacks on them will continue . But nobody can show there is a sectarian pattern to our attacks on the UDR . ”
(MORE LATER). 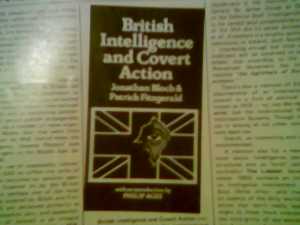 SPIES UNDER A SPOTLIGHT…….
‘British Intelligence And Covert Action’ , by Jonathan Bloch and Patrick FitzGerald. Published by Brandon/Junction ,1983. Reviewed here by Peter Hayes.

Overall , this is an interesting and readable book and is to be recommended , which gives us an opening to mention a new journal/newsletter about “…intelligence , parapolitics and state structures..” called (somewhat curiously) ‘The Lobster’. Issue Number One (September 1983) contains an interesting article on British Intelligence involvement in the Kincora Boys Home affair, and numerous ‘shorts’ on aspects of the dirty world of covert operations that don’t really appeal to us but might to those more interested in the nitty-gritty of spy-watching.
[END of ‘SPIES UNDER A SPOTLIGHT…….’]
(NEXT : ‘HOPE IN THE SHADOWS’ , from ‘Magill’ magazine , 1986. Please note that we will not be starting this article until early April , as we are taking a holiday soon – our first decent break since May 2008 !) 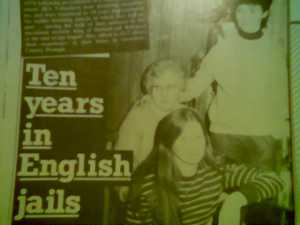 TEN YEARS IN ENGLISH JAILS…….
Anne and Eileen Gillespie were arrested in April 1974 following an explosion in a Manchester house where IRA Volunteers were preparing incendiaries , and were sentenced to 14 years imprisonment for earlier bombing attacks in which they had no part , serving the bulk of their sentence in the maximum security wing of Durham Jail. Released at the end of last August , they talked to ‘IRIS’ about their experience , at their home in Gweedore , County Donegal .
From ‘IRIS’ magazine, August 1984.

Marion and Dolours Price were a great help to us – they told us what we could and could not do but of course we would have survived if they had not been there to give us their support , but they helped us to make those first four months bearable.

We kept a very low profile and never spoke to anyone else at all for the first year and spoke only Irish unless we had to reply to a prison Screw. ‘H’ Wing was a very new prison when we went there , it had only been opened a few months earlier in November 1974 and had only about 15 or 16 prisoners , of which most were women doing short sentences.

These women had been sent there to help organise the wing for the numbers of long-term Irish women prisoners who were expected to fill it in time. Thank God they never got them , but that was the intention…….
(MORE LATER).