ONE MESSAGE , DELIVERED TWICE – ‘NONE OF THE ABOVE!’

As per my stated intention , I deliberately spoiled my two ballot papers today , Friday 5th June 2009 : there was no candidate whom I considered to be principled enough to deserve my support and rather than simply not bother claiming my two ballot papers – one for the local council elections and one for the European Gravy-Train election – I claimed both and purposely spoiled both.

I had no hesitation or second thoughts regarding this : it is career politicians and wanna-be career politicians like those who contested seats in my area that have this State corrupted and have the majority of people here either living on the bread-line – if they’re ‘lucky’ enough to have a job in the first place – or having to borrow from money lenders for day-to-day living expenses. Over 400,000 people are now signing-on for State benefits and I for one will not be rewarding one or more of the morally bankrupt politicians responsible by voting for them. 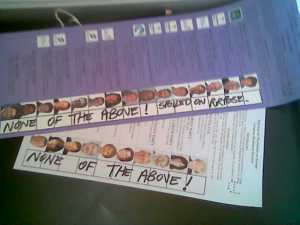 A plague on all their houses.

To those that will say something along the lines of “Irish men and women fought hard to get you the vote in the first place…” I say – No , they didn’t . Those people struggled as they did to obtain democracy , fair play and justice : no man or woman that I respect sought to obtain for me or others a vote in a morally and politically corrupt Statelet , where the ‘leaders’ reward themselves financially with outlandish salaries and pension ‘rights’ while those that they beg , plead and bribe to vote for them are practically financially destitute.

No one on those ballot papers worth voting for.

If you haven’t already been to your polling station , you could do worse than to do as I have done today – actually , you could do two things worse : vote for a candidate you believe to be ‘the best of a bad bunch’ and not bothering at all to visit the polling station . Do visit your polling station , do claim your ballot papers , and do purposely spoil it if you are faced with the same political ‘choice’ that I was faced with today . A ‘NONE OF THE ABOVE!’ mark on those ballot papers will serve you , and the economy , much better than a vote for those you consider to be ‘the best of a bad bunch’ .
Thanks for reading!
Sharon.

4 Responses to ONE MESSAGE , DELIVERED TWICE – ‘NONE OF THE ABOVE!’