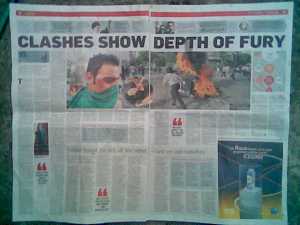 Not ‘Terrorist Sympathisers’ or ‘Dissidents’ , but “Protesters” !

The above picture is from the British ‘Sunday Times’ newspaper , issue dated June 21st , 2009 , and it was used to accompany an article on the on-going political unrest in Iran. The caption on the photograph reads – “Protesters set fires in Tehran yesterday, where a young woman, inset, was filmed dying of gunshot wounds. Far left, a battered and bruised masked man.”
When that same newspaper covers stories of political unrest in Ireland in which Irish Republicans are involved , it ‘slants’ the story and any photographs to suit its own political agenda : an article like the above would be titled something along the lines of ‘CLASHES : LAST THROW OF THE DISSIDENTS’ and a photograph like the above would be captioned – ‘Terrorist sympathisers riot and loot yesterday in Belfast/Dublin/Derry/Kerry etc as a female dissident lies dying , having been injured by her own side . Far left ,a Republican thug got more than he bargained for when he failed to make good his escape , having attacked the security forces’.
The ‘Sunday Times’ article goes on to highlight how the authorities in Iran are manipulating and ‘spinning’ reportage of the unrest , and how they are censoring and attempting to censor the output from journalists covering the story. Pot , kettle = sickening hypocrisy from that particular source.
As Oscar Wilde stated – “There is much to be said in favour of modern journalism . By giving us the opinion of the uneducated , it keeps us in touch with the ignorance of the community.”
In the case of this and other articles in the ‘Sunday Times’ , the printed opinion of the journalists in question keeps us in touch with “the ignorance” (‘attempted spin’) of the”community” they work for – the political ‘establishment’ .
Sharon.