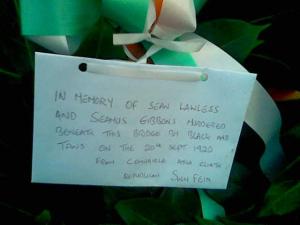 “RIC Head Constable Peter Burke and his brother, Sgt Michael Burke are attacked by the IRA in Mrs Smith’s public house on The Square, Balbriggan, Co. Dublin. In retaliation, the Auxiliaries, who are based in Gormanstown, carry out reprisals in Balbriggan, killing two suspected IRA men, burning 54 houses, a hosiery factory and loot four public houses. This became known as the ‘Sack of Balbriggan’…..”
(From here.) 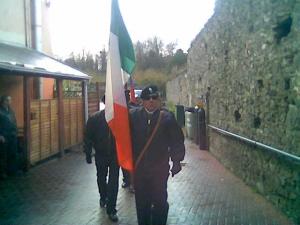 The parade leaves the assembly point on its way to the Memorial Stone on the bridge. 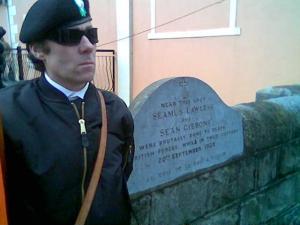 About thirty Irish Republicans and supporters braved the damp weather – which, near the end of the Commemoration , turned (once again!) to heavy rain – and stood on both sides of Balbriggan Bridge to remember two Republicans who were murdered by British Auxiliaries on 20th September 1920. 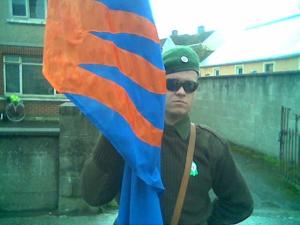 The Commemoration was Chaired by Andy Connolly , Dublin, who spoke about the similarities between the aims and objectives of Irish Republicans then , and now : that of securing , by whatever means necessary,a complete British political and military withdrawal from Ireland. A wreath was laid on behalf of the Republican Movement , the Easter Message from the leadership of the Movement was read to the crowd, the 1916 Proclamation was read by a member of the RSF Colour Party, and a letter of support from Irish Republican POW’s was read. 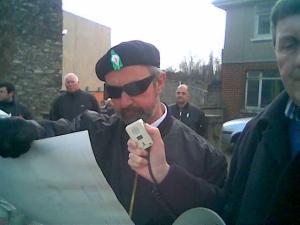 A member of the RSF Colour Party reads the 1916 Proclamation on Balbriggan Bridge.

A family relation of Sean Gibbons, one of the men murdered by the British Auxiliaries , was present and was welcomed by the organisers. He was extremely happy to see that fellow Republicans had gathered to remember his relation and said Seán himself would have appreciated it. After the National Flag was dipped , the Chairperson thanked all who had braved the elements and made the effort to attend, and brought proceedings to a close by singing Amhrán na bhFiann.
Finally – four members of the ‘Special Branch’ tried to hinder or stop the Commemoration by constantly threatening to arrest those present for refusing to co-operate with them or/and for not fully answering the questions that were shouted at them. It was made clear in no uncertain terms to them by RSF that a Republican ceremony will be held there, today , regardless of what action the State takes against them ;those present formed-up amidst the mini-melee that the Branch had instigated and proceedings began , as planned.
A full report , with extra pictures , will be carried in the May 2010 issue of ‘Saoirse’ – the only true and genuine monthly Irish Republican newspaper – which will be available from the usual outlets on Wednesday 5th May 2010.
Thanks!
Sharon.