Republican Sinn Féin Poblachtach members staged two protests today in O’Connell Street , Dublin, both of which lasted for 75 minutes : a ‘Political Status’ picket , and a ‘No To Royal Visits’ picket. About 20 activists , including a ‘crew’ who ‘worked the immediate area’ with leaflets and selling the ‘Saoirse’ newspaper , maintained a very visible presence on the traffic isle facing the GPO , and were well received by shoppers and passers-by ; indeed, tourists from France , Italy and America , amongst other places , not only took leaflets and purchased ‘Saoirse’ , but practically formed a queue at one stage to be photographed with the assembled Republicans! 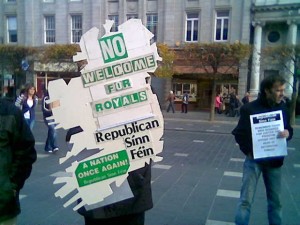 More than 30 copies of the ‘Saoirse’ newspaper were sold , and 900 leaflets distributed – 300 each of ‘Political Status’ leaflets , ‘No Royal Visit’ leaflets and ‘CABHAIR Christmas Swim’ leaflets , a ‘job’ which kept the seven-person ‘crew’ engaged for the duration of the pickets. Incidentally , two ‘crew’ members returned to base (!) with the equivalent , roughly, of €50 each (in American and Australian dollars!) , which they received as donations , from tourists who had earlier ‘posed’ in between the Republican placards and banners in O’Connell Street – they were full of praise for those on the picket , and were especially delighted to be given a half-dozen of each leaflet each , and a few ‘papers! 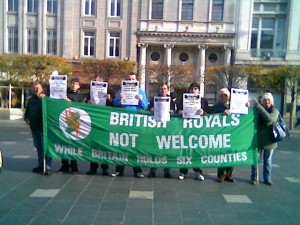 “Just glance over the placard – don’t read it slowly …please….” : we can explain the…..

…..missing ‘N’ ! The missing letter can be attributed to a Special Branch man , Nicky , who, accompanied by his equally ‘Special’ girlfriend – too shy to give her name – tried their best to move the RSF ‘picketeers’ off the traffic isle and , when that failed, tried to scare away the on-lookers and the many tourists – but no luck there , either ! So , in desperation , we think he must have tried to interfere with the placards and obviously succeeded in damaging at least one. That’s our story , icky (!) , and we’re sticki g to it…;-) !

Finally – even though we promised we wouldn’t mention it (didn’t we , Louise and Maire ?) , but it’s almost Halloween and we’re up for a wee bit of divilment (!) : an RSF Comhairle Laighean meeting (‘Leinster Executive’) was held today in a venue near Fairview in Dublin , from 12 Noon to 2pm , clashing with these two pickets. Bad timing on someones part , eh , girls…..;-) !
Anyway : full marks to RSF for the good jobs today , thanks to the many wishes of support from the thousands of people who seen us today , to Louise and Maire (!) and , of course , to icky and his girlfrie d , whom we hope will tie the knot soon.
Where they tie it , of course , is there own business….
Thanks!
Sharon.