This blog has received photographs and verbal confirmation that pro-‘NOTA’ and anti-‘queen’ votes have been made in at least 17 polling stations in the Dublin Mid-West constituency , and surrounding areas , including Tallaght, Ballyfermot and Bluebell. This campaign was started by three individuals in the Neilstown area of Clondalkin and , although none of them are members of any Irish Republican organisation , they are solid supporters of Republican Sinn Féin and have been for decades , and are highly regarded and valued as such by the local Cumann of the Movement. They , and their equally ‘NOTA’-inclined friends approached members of the Clondalkin-based Maire Drumm/Kevin Barry Cumann of Republican Sinn Féin Poblachtach and an agreement was reached : in return for writing ‘None Of The Above’ and an anti-English ‘queen’ visit message on ballot papers , RSF would use its local network of contacts to distribute the leaflets provided by the pro-‘NOTA’ people – resulting in thousands of said leaflets being distributed in the locality and pro-‘NOTA’/anti-‘queen’ messages being wrote on ballot papers in an area reaching from Balgaddy in North Clondalkin to the foothills of the Dublin mountains , in Tallaght, and down towards Dublin City Centre as far as Inchicore! 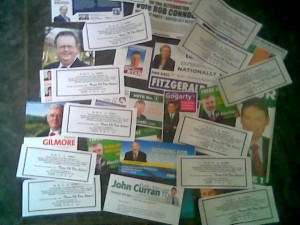 Political candidates – ‘None Of The Above’.

No welcome for wannabe or existing Free State politicians or English ‘queens’ !

This blog congratulates those involved in this (at the time of writing) on-going campaign , which will continue until 10PM tonight : hopefully , this campaign will prevent one or more Free State politician (or ‘wannabe’) from enriching themself in Leinster House and has encouraged dozens of people to take part in a political campaign who otherwise would not have got involved – plus , of course , Republican Sinn Féin , in that huge catchment area , has gained the trust and confidence of many people that it might not have otherwise been possible to reach : ‘winners all round’ except , of course , a few Leinster House politicians and their ‘wannabe’ colleagues!
Well Done!
Thanks,
Sharon.