EASTER SATURDAY,SUNDAY AND MONDAY IN DUBLIN , 2012.

On Easter Saturday , 7th April 2012 , Republican Sinn Féin in Dublin set up a stall at the GPO in O’Connell Street , Dublin City Centre , from which T-shirts , ‘Saoirse’ newspapers , Republican leaflets and metal and ordinary Easter Lilies were sold/distributed : the two-hour event received a fantastic response from the hundreds of people that were in the area and, indeed , such was the success of the venture , that it may become a regular feature of RSF activity in Dublin for future Easter weekends.
On Easter Sunday , the usual Republican Commemoration was held in Deansgrange Cemetery where , apart from a touch of bad weather and the usual State monitoring ,all went according to plan : full details of both of these events will be published in the May 2012 edition of ‘Saoirse’ , which goes to print on Wednesday 2nd of that month.

On Easter Monday , Republicans who had gathered at the Garden of Remembrance in Parnell Square marched , at 1.45pm , from there , down O’Connell Street – with a Piper , an RSF Colour Party and uniformed representatives from both Na Fianna Éireann and Cumann na mBan leading the way – and formed-up outside the GPO , where a small stage and lectern , a music system and speaker amplification system had been set up. The proceedings were Chaired by Andy Connolly , Dublin , and Tómas Ó Cléirigh gave the main oration. A Wreath was laid at the GPO by Margaret Mullen , and a message of support from Republican POW’s was read out to the crowd. The Easter Statement from the leadership of the Republican Movement was read , as was the 1916 Proclamation. Five hundred ‘packs’ of Republican leaflets were distributed on the day , between 12 Noon and 3pm , totalling over two-thousand leaflets (150 ‘packs’ with 3 leaflets , 150 with 4 leaflets and 200 with 5) and, had we had more , we could have shifted those as well !

We publish with this brief report a few pics , more of which can be viewed on this ‘Facebook’ page , as can a couple of videos from the Commemoration and a brief video from the ‘Get Together’ (!) we had afterwards – also available at that link is a pic from the CABHAIR raffle which we held on Easter Sunday 8th April , the results of which will be posted here tomorrow , in our usual Wednesday offering , included in which will be further details concerning the ‘Inkgate’ affair , during which we will be introducing ‘Pat’ , a contender for the inky throne…..
So take a peek at our pics and go to that ‘Facebook’ page for more – and check back with us tomorrow evening for more of the same , more or less ! 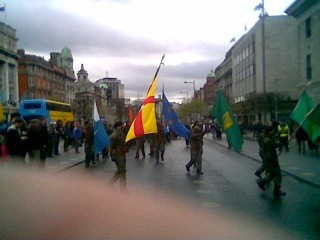 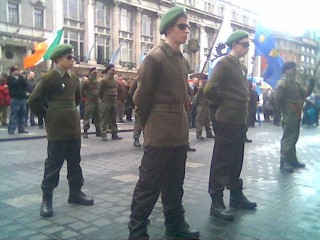 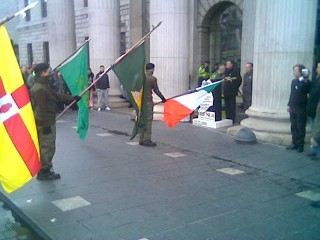 Dipping of the Flags. 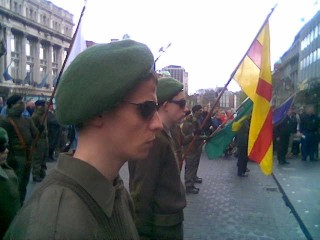 View from the Front…. 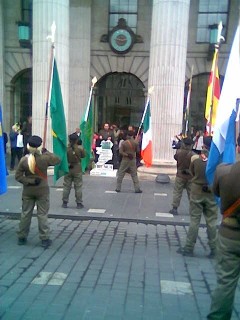 …and the view through the Green. 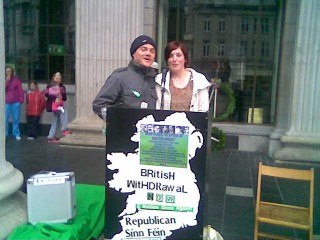 How did this get in here…..bloody tourists (hello Mr and Mrs J!)

A mother of three (and a Granny!) and a political activist , living in Dublin , Ireland.
View all posts by 11sixtynine →
This entry was posted in History/Politics. and tagged Easter Commemorations., Easter Monday 2012, RSF, RSF Easter 2012. Bookmark the permalink.