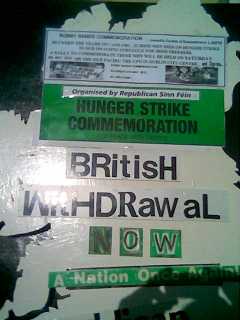 The Annual RSF-organised Bobby Sands Commemoration was held today in Dublin on the traffic-isle in front of the GPO , watched by a crowd of about two-hundred people in total – not counting the ten uniformed State Garda members and eight of their plain-clothed colleagues. One Garda driver , in particular, must have been afraid of getting a ticket or clamped , maybe, as the only ‘safe spot’ he could find for his van was six feet away from the speakers lectern.

The parking ‘problem’ was one of two incidents which RSF had to cope with on the day : the other one was when a lady , recently released from Mountjoy Jail , and fresh from a pub between there and the GPO , insisted that Irish Republicans were “wrong” and she was “right” (in relation to everything, apparently…) but such was the foul language used by this woman she quickly drew upon herself the (unwanted) attention of the Gardai , who ‘escorted’ her off the traffic-isle and returned her safely to oblivion. The only other possible ‘fly in the ointment’ was the weather , as it’s almost impossible to ‘keep the crowd’ in an open-air situation like that should the Heavens open which , thankfully , they didn’t : we had a cool breeze throughout , overcast at times, but no rain. God , or Bobby , was looking down on us…..!


The RSF ‘warm-up’ speaker – John Horan , Dublin – asked , at 1.35pm, that the RSF ‘A Team’ (‘Amplification Team’ !) turn off the music system and turn on the amp equipment : he introduced himself to the crowds , and introduced a ‘twist’ to proceedings – Irish Republican female hunger-strikers. In his speech , John concentrated on one woman in particular – Dorothy MacArdle – and outlined in good detail her own history , including the fact that , in 1923, Dorothy MacArdle was one of 340 Irish Republican women who went on hunger-strike. He did reference parts of her life story which he and many others – myself included – believe she should have handled differently , but he stressed that those “transgressions” do not take away from the fact that it is not only Irish Republican men who have undertaken a hunger strike.

At about 1.45pm , led by Séan the Piper , an RSF Colour Party , uniformed representatives from Na Fianna Éireann and Cumann na mBan ,the Parade left the Garden Of Remembrance in Parnell Square and marched down O’Connell Street to the GPO , where a small stage with a speakers lectern on top , an amplification system and a separate music system had been set-up : the three uniformed groups were instructed by the Chairperson , Paddy Tidd , to ‘form up’ facing the pillars of the GPO , following which Paddy introduced himself to the crowd and welcomed and thanked them for attending the Commemoration – he then named each of the twenty-two hunger-strikers who , between the years 1917 and 1981 , died in this on-going struggle. RSF Vice-President , Fergal Moore , and Ard Chomhairle member Cait Trainor also addressed the crowds from the stage , both delivering hard-hitting , in-depth yet concise synopses of the political situation as it exists today in this warped State. We publish with these few words some pics from the event today , and a full report – including the text of the main speeches – and more pics will be published in the June issue of ‘Saoirse’ , which goes to print on Wednesday 30th May 2012. Incidentally , myself and the other members of the ‘Leaflet Team’ were correct in our assesment regarding the amount of leaflet ‘packs’ that could be distributed at this Hunger-Strike Commemoration – we had 700 such ‘packs’ but wanted (and needed !) at least 1,000 : we all received a call on our mobile phones just before 2.30pm requesting that , between us , we keep at least 50 ‘packs’ , as two girls who live beside the venue where the ballad session is being held tonight wanted same to do a ‘door-to-door’ with in the area. But , at that stage, we had less than thirty ‘packs’ left between us…..!

Finally : great job today by RSF members and Colour Party , Séan the Piper , Na Fianna Éireann , Cumann na mBan , Paddy , Fergal , Cait and John and the two-hundred-or-so people that stood with us , despite the heavy State presence – a very fitting tribute was paid to the twenty-two men that were remembered. Few pics now , more in the June 2012 issue of ‘Saoirse’ : 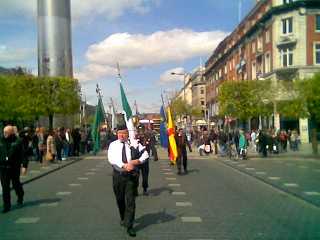 The RSF Commemoration parade arriving at the GPO , Saturday 5th May 2012. 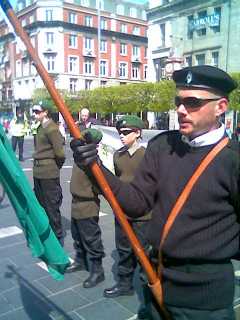 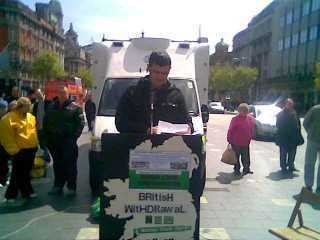 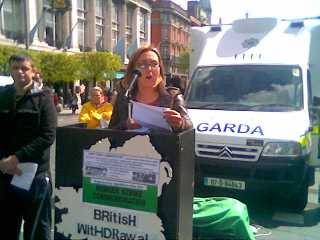 Cait Trainor , one of the speakers at the Hunger-Strike Commemoration in Dublin today , Saturday , 5th May 2012.

A mother of three (and a Granny!) and a political activist , living in Dublin , Ireland.
View all posts by 11sixtynine →
This entry was posted in History/Politics. and tagged 22 Irish Hunger-Strikers, Bobby Sands, Dublin May 5th 2012.. Bookmark the permalink.