Santa and one of the Cabhair swimmers, pictured on site at the Grand Canal in Inchicore, Dublin, on Christmas Day 2014, delivering a message. Mr. Claus made his appearance dressed in ‘civvies’ as he didn’t want to alarm any of the children present – the poor man had fractured his left arm shortly after making his last house call earlier on that morning (but some of us suspect it was a ruse in case he was asked to swim…!)

We had a lucky break with the weather on both Christmas Eve and Day – the miserable, damp, rain, darkness and all-round gloom that had been a feature of December 2014 vacated the scene for those two days, leaving a crisp, frosty blue-sky replacement atmosphere for those who insisted on frollocking in and around the Grand Canal at Inchicore, Dublin. And at least fifty-seven people done just that – five swimmers, about fifty onlookers and two from Harcourt Terrace who were there, uninvited and unwanted, to observe proceedings on behalf of the State.

Christmas ‘goodies’ , supplied by local shops , pubs etc, and for which fifty-five people were very grateful. Two poor souls, meanwhile, looked sick and weren’t allowed to sample the wares, being advised instead that a good sup of canal water might cure them…..

…and this mysterious ‘Man In Black’ appeared, as if from nowhere, to ensure that the ‘Unauthorised’ did not have a mince pie and a bottle of beer. A shady looking character, without a doubt, and we suspect he may have pushed Santa off the roof earlier on that day. Little does he know it, but we very nearly had six swimmers for the event!

The ‘Speech from The Lock’ was given by John Horan, Clondalkin,Dublin, who thanked almost all for attending and reminded all present that this was the 38th successive year of the swim, and gave a brief history of the event from 1976 to date, mentioning that in two years time republicans will witness the 100th anniversary of the Easter Rising and the 40th anniversary of the POW Swim. 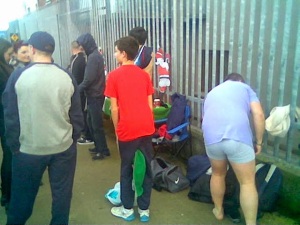 The swimmers get ready to earn their keep…. 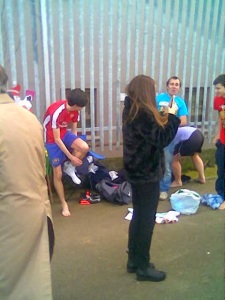 …as a brave female mistakenly wanders in to the male ‘dressing room’….

…which encourages three of them to make a run for the ‘diving board’, from where they watch…

…as one of their own swims to safety…

…as their fifth colleague looks on, wondering what all the fuss is about! 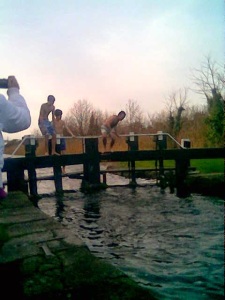 Panic ensues, as the female ‘intruder’ chases after them….

….causing ‘each-man-for-himself’ mayhem in their ranks…

…so much so that this swimmer feels he’d be safer staying in the canal!

Order restored – and four of the five dry off at the fire…. 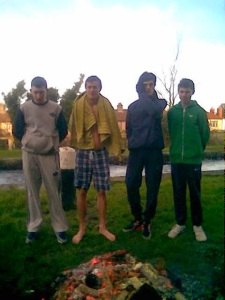 ….then get dressed, whilst thinking of some words of encouragement to entice their fifth colleague to leave the safety of the water and join them at the fire!

Anyway – this 38th-in-a-row Cabhair Swim was a resounding success, with much-needed finance secured for the republican prisoners and their families, all of whom are in our thoughts, and not just at this time of year. A full report with more pics of this and the other 25th December 2014 Cabhair Christmas swims will be carried in the January 2015 issue of ‘Saoirse’, which goes to print on Wednesday, 14th of that month. Finally, thanks to almost all who joined with us on the Grand Canal on Christmas Day, to the many on-lookers on the bridge, to the motorists who sounded their car horns in support and to the local businesses for their many offerings. Appreciated, one and all!

A mother of three (and a Granny!) and a political activist , living in Dublin , Ireland.
View all posts by 11sixtynine →
This entry was posted in History/Politics. and tagged Cabhair Swim Christmas Day 2014.. Bookmark the permalink.