Whatever entity, if any, that secured dry weather for us on Christmas Day last at the Cabhair Swim deserted us with a vengeance on New Year’s Day in Glasnevin Cemetery as the strong winds blew the heavy rain at us from all angles, including horizontal and vertical. But the fifty-or-so of us that were there are the type that walk in the rain, whereas others just get wet from it. In other words, we persevered! 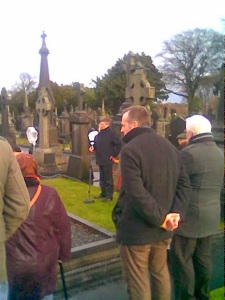 The event was Chaired by Andy Connolly , Dublin, who welcomed all to the commemoration and gave a brief outline of Dáithí’s involvement in the Republican Movement.

A wreath was laid on behalf of the Movement by Matt Conway, Kildare and, as per a request from the Ó Conaill family, a decade of the Rosary was recited by Padraig Ennis, Dublin.

The oration was delivered by Josephine Hayden, in which she detailed Dáithí Ó Conaill’s many contributions to republicanism and asked, as did the Chairperson, what Dáithí would have made of the many ‘activists’ that confine themselves to ‘Facebook’ and similar sites rather than actually take part in the events they post comments about, a question which those in attendance felt should be asked, as both speakers were soundly applauded for doing so.

RSF Colour Party and members of Na Fianna Éireann – both groups were commended by all present for maintaining a dignified stance despite harassment from the political police (who arrested one man for refusing to give them his details) and the discomfort and soaking they endured from the wind and rain.

Finally, after the Chairperson brought proceedings to an end by singing our National Anthem, all republicans present were invited to a near-by pub for soup and sandwiches and a place to hang their wet coats. RSF is to be congratulated for holding such a worthy event in the face of both inclement elements. A full report of this commemoration will be carried in this months issue of ‘Saoirse’, which goes to print on Wednesday the 14th.

A mother of three (and a Granny!) and a political activist , living in Dublin , Ireland.
View all posts by 11sixtynine →
This entry was posted in History/Politics. and tagged Daíthí Ó Conaill., Glasnevin, New Year's Day 2015.. Bookmark the permalink.