RALLY AT THE ROADWORKS FOR A PICKET… 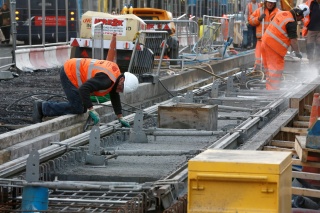 Due to the luas works on the island at the GPO, which is affecting traffic etc on O’Connell Street, it will not be possible to hold the annual Eve of All Ireland Rally, in its usual format, at the GPO this year ; instead, Republican Sinn Féin will hold an ‘Éire Nua’ picket from 12noon to 2pm under the portals of the GPO.

Alternative routes and compositions etc (for instance, to hold the whole event at the Garden of Remembrance, rather than to just assemble there) were discussed at length by the organising committee but, due to the nature of the problem and the shortage of time in which to suitably advertise any new arrangement, it was finally agreed that a republican presence – a picket, in this case – should be maintained at the GPO on the eve of the All-Ireland final. Such a presence has been visible at that location on the day before the final since at least 1958: “One of the largest public rallies seen in Dublin for years was held by Sinn Féin at the GPO on the eve of the All-Ireland Football Final. Headed by a Colour Party and a pipe band, a parade of more than 2,000 people marched from Parnell Square through the main city thoroughfare as a protest against the continued unjust imprisonment of Irishmen without charge or trial. Contingents from all over the country took part and many carried banners and placards including groups from England and Scotland. In the Ulster section was a strong representation of the Derry supporters who thronged the capital city for the Final. One placard they carried asked -‘Why are Six-County nationalists interned in the Curragh?’…..” (From ‘An tÉireannach Aontaithe/The United Irishman’ newspaper, November 1958.)

This change, unfortunately, also affects the ability to properly distribute the ‘song book’-leaflet packs which will now be kept in storage for another occasion, although other material will be distributed, as best as possible, allowing for the constrained space we have been obliged to operate in and this new, temporary, format also denies the organisers the use of the small stage and lectern unit which has been a feature of the event since the 1980’s. But we’ll make the best of what we’ve got – see you at the GPO in Dublin on Saturday, 17th September 2016, between 12 noon and 2pm.

A mother of three (and a Granny!) and a political activist , living in Dublin , Ireland.
View all posts by 11sixtynine →
This entry was posted in History/Politics. and tagged Eve of All-Ireland Rally 2016.. Bookmark the permalink.