ON THIS DATE (21ST FEBRUARY) 42 YEARS AGO : IRISH REPUBLICAN ‘BURIED’ BY FREE STATERS UNDER SIX FEET OF CONCRETE. 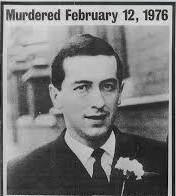 ‘Exhumed in glory a November moon was drifting
And freedom’s light aglow
When some IRA had gathered in a graveyard in Mayo.
Those brave Irish Freedom fighters
Who came together in the West
Had come to fill the promise to lay Frank Stagg at rest.’

‘Frank Stagg was the seventh child in a family of thirteen children, born at Hollymount near Ballinrobe, Co Mayo, in 1942. Stagg was educated to primary level at Newbrooke Primary School and at CBS Ballinrobe to secondary level. After finishing his education, he worked as an assistant gamekeeper with his uncle prior to emigrating from Ireland to England in search of work. In England, Frank was employed as a bus conductor and later qualified as a bus driver. In 1970 he married Bridie Armstrong from Carnicon, Co Mayo. He joined Sinn Féin in Luton in 1972 and shortly afterwards joined the IRA. Frank remained in touch with home and spent his annual holidays in Hollymount up to the year of his arrest and imprisonment in 1973. In the words of his mother, “he never forgot he was Irish…” ‘ (From here.)

Frank Stagg had begun his fourth (and final) hunger strike in late 1975 – having been convicted under the notorious ‘British Conspiracy Laws’ – as it was the only ‘weapon’ he had at his disposal with which to impress on his British captors his desire to be repatriated to Ireland. He died, blind and weighing just four stone, in Wakefield Prison on 12th February 1976, after 62 days on hunger strike.

His remains were hijacked by suited, uniformed and armed members of the State, acting under orders from FS Taoiseach Liam Cosgrave and his ‘Justice’ Minister, Paddy Cooney – the airplane carrying his coffin was diverted from Dublin to Shannon and, when it landed, the Special Branch surrounded it and forcibly removed the coffin and buried it, supported by an armed escort, under six feet of concrete in Leigue Cemetery in Ballina, County Mayo, in a grave purchased by the Free Staters and which was located about 70 meters from the Republican Plot in that cemetery ; on that day – Saturday, 21st February, 1976, 42 years ago on this date – the Requiem Mass was boycotted by almost all his relatives.

For the following six months, armed State operatives maintained a heavy presence in the graveyard to prevent Irish republicans from affording Frank Stagg a proper burial but they were not the only group keeping a watch on the grave : the IRA were aware of their presence and, after the Staters withdrew, the IRA made their move : on the night of the 5th of November, 1976, the IRA disinterred Frank Stagg’s remains and reburied them with his comrade, Michael Gaughan.

When questioned in Leinster House about this sordid affair, its ‘Director’, Paddy Cooney, stated – “The persistent attempts by members of an unlawful organisation and their associates to exploit the situation that arose are well known and, indeed, notorious. Because of this and because also of certain obligations of confidentiality, I must decline to make any comment on the question of the choice of burial place..”The “question of the choice of burial place” was, thankfully, not one that was left to Cooney and his thugs to decide. Frank Stagg, aged 33, had three funerals and two burials. One funeral had no body and one burial was done in darkness. In his final message to his comrades in the Republican Movement he wrote : “We are the risen people, this time we must not be driven into the gutter. Even if this should mean dying for justice. The fight must go on. I want my memorial to be peace with justice.” That objective has still to be obtained and those in Leinster House, Stormont and Westminster are still working against it, still pouring ‘concrete’ on Irish republicanism. Shame on them.

From ‘The United Irishman’ newspaper, October 1954.

NOT A POLITICAL PARTY.

Sinn Féin is not, and never was, a ‘political party’. Sinn Féin is a national movement pledged to assert the sovereign independence of Ireland. It is a movement of the common people, successor to the popular movements all down the ages which strove to restore Ireland to her place amongst the nations.

Democratic in its essence, it relies not on influential figureheads nor on craven intercession in the halls of the enemy, but on the will of the people to be free. In the past it raised them from the low state in which nineteenth-century politics had left them, and gave to each individual a new dignity, and a realisation of the part that each one of them could play in the rebuilding of the Nation.

One of the most noteworthy characteristics of the war years – 1916 to 1922 – was the high sense of personal honour and integrity of those who took part, and the rebirth of that deep national pride, which had almost been forgotten. Antipathies of class and creed found no echo in the hearts of those young volunteers – they lived and worked that Ireland might once more be a country fit for Irishmen to live in. (MORE LATER.)

“TO EVERY GENERATION ITS DEED…”

From ‘The United Irishman’ newspaper, February 1955.

All this because the men who control our destiny are trying to rebuild a nation on the foundations of half a nation. They have not produced results. For past services and sacrifices let them have honour, but not office. ‘To every generation its deed’ – they have done theirs.

The immediate duty of our own generation is to unite our country before decadence has sapped our strength, and before the occurrence of a world war has added its special difficulties to our problem. The national fervour accompanying our effort will do more for Gaelic culture etc than the national apathy at present prevailing.

The goal is not merely a united Ireland but a united Irish-Ireland, and more than that. It is a position of influence for good among the nations of Europe and of honour before the eyes of the world. (END of ‘TO EVERY GENERATION ITS DEED’. Next – ‘COMMENTS’, from the same source.)


GROWING UP IN LONG KESH… 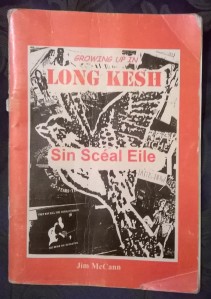 Finally I knew I would have to hit someone – people were beginning to notice me sitting on the ball in the centre of the pitch. I sprung into action. This fellow from somewhere in the county Tyrone , I think, ran up and kicked the ball with me sitting on it, so I jumped up and grabbed him by the throat. “What’s the matter with you?”, he shouted. “Why did you kick out at me?”, I shouted back. ” I didn’t, I was kicking at the ball” , he replied. The haymaker I launched at his nose travelled from about five feet behind me. I was like a coiled spring. I wound my arm up and put everything into that one punch. It had his name written all over it.

Unfortunately, it had the wrong address. I missed him by about two feet, lost my balance and fell at his feet. Oh Christ! I thought, here it comes… “Are you all right there, Jim?” he asked, picking me up like a rag doll and dusting me down. “Thank God I missed you, I might have killed you”, I ‘joked’. “What was that?” he asked, acting as if he hadn’t noticed me throwing the punch – but I can recognise a ‘fool’s pardon’ when I see one.

By this point, there were about 30 men in one of the goals beating seven bells out of one another – the craic was ninty. All types of fighting styles and struggles were involved, from sissy-stuff, embryonic Thai boxing, over-the-top Bruce Lee moves, WWF wrestling, Sumo wrestling, Graeco-Roman wrestling and, at a higher level, intense political debate! (MORE LATER).

A mother of three (and a Granny!) and a political activist , living in Dublin , Ireland.
View all posts by 11sixtynine →
This entry was posted in History/Politics. and tagged Bridie Armstrong Carnicon Co Mayo, Frank Stagg., Leigue Cemetery in Ballina Mayo., Liam Cosgrave, Paddy Cooney, The United Irishman newspaper, Wakefield Prison. Bookmark the permalink.