ON THIS DATE (22ND JANUARY) 97 YEARS AGO : THREE REPUBLICAN PRISONERS EXECUTED BY THE FREE STATERS.

Three Anti-Treaty IRA Volunteers (‘Irregulars’, as the Staters called them), who had been captured by Free State forces on the 7th January, 1923, and ‘found guilty’ of having arms and ammunition in their possession “without proper authority”, were executed on this date (22nd January) in 1923 – James Melia (pictured), aged 20, of 2 Bridge Street Dundalk, Thomas Lennon, aged 19, from Dowdallshill, Dundalk and Joseph Ferguson, aged 27, of Giles Quay, Bellurgan, Dundalk.

“Considerable moral courage, not to speak of physical courage, was required of anyone having anything to do with Sinn Féin and the IRA here…their task would have been more pleasant if it had to be carried out in the heart of England itself because treachery and the very bitter hatred that was part and parcel of the Irish loyalist would not be encountered, or at least would be expected and prepared for…” (from here.)

That the three young men mentioned above (and, indeed, tens of thousands of other men and women) were brave and had the moral courage to make a stand against both British and their proxy forces in the Free State is without question. Also without question is that those who sought to destroy the republican struggle and its (on-going) objectives had, and have, the ‘moral courage’ of a de Vichy administration.

‘MacDonagh and MacBride
And Connolly and Pearse
Now and in time to be,
Wherever green is worn,
Are changed, changed utterly :
A terrible beauty is born…’

From ‘The United Irishman’ newspaper, December 1954.

“The whole of this wooden building is reeking with plum-pudding. I hear a distant sound of loud applause and stamping of feet, reminding me of Conciliation Hall…I wish them all a merry Christmas, and many happy returns of the same. But I doubt if it will ever return to me. I am sitting all day, shrunk together in my cell, dismally ill, and wrapped in coats, like a man on the box-seat of a coach…” – it is a gloomy picture that John Mitchel paints of his first Christmas in an English prison.

To those of us who have not spent a Christmas in prison or, in fact, have never been in prison at all, it is hard to imagine the state of mind of those who must endure it. Particularly hard is it for those who have families and dependents, who face a cheerless Christmas bereft of their loved ones.

It is no new thing in Irish history for the men to be in prison, and this generation, and this year, are no exception but, despite cynicism and slave-mindedness, there are still men to be found who will sacrifice all – family, position and friends – to serve the ideal of ‘Ireland a Nation’. Do not think that these men have not counted the cost, or have set out lightly on the hard road to freedom. Do not think that they are fools or fanatics, or both. They are ordinary men of all walks of life, who have put into practice the principles so many of us affirm… (MORE LATER.)

ON THIS DATE (22ND JANUARY) 48 YEARS AGO : DEATH OF A POACHER-TURNED-GAMEKEEPER. 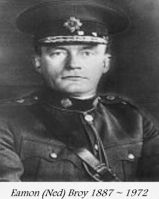 “Garda Special Branch – Britain’s lackeys : Gombeen men lured down from the mountains of Kerry by the smell of fresh meat..” – so summarised Brendan Behan the men of Special Branch over 50 years ago. Some things have changed since then, they now have the odd female detective and on rare occasions you may even hear a Dublin accent from the men in the (Ford) Mondeo. To republican activists they are synonymous with harassment and thuggery…” (from here.)

Col. Eamon Broy, who died on Saturday at his home, Oaklands Drive, Rathgar, Dublin, aged 85, was a former Commissioner of the Garda Siochana. During the War of Independence he was one of Michael Collins’s three ‘contacts’ among the detective force in Dublin Castle and played a leading part in breaking the secret information system there. A native of Rathangan, Co. Kildare, he joined the old D.M.P. in his youth and was attached to G Division – the secret service arm of the British administration in Ireland. During this period he and his police colleague, David Neligan*, formed the heart of Collins’s intelligence service. Between 1917 and 1921 they fed him with vast amounts of highly classified information and warnings.

Col. Broy was arrested by the British in February, 1921, and imprisoned in Arbour Hill until the Truce. He was subsequently secretary of the then (Free State) Department of Civil Aviation and later adjutant of the first Irish Air Corps, with the rank of commandant. On his promotion to colonel he was made OC of the ground organization of the corps.

In 1922 he became secretary to the D.M.P. and on the formation of the Dublin Metropolitan Garda in 1925 he was appointed chief superintendent. In 1929 he was transferred to the Depot, Phoenix Park, as commandant. In February, 1933, he became chief of the Detective Division in succession to Col. David Neligan and inside a month was appointed Commissioner of the Garda Siochana to replace General Eoin O’Duffy who had been dismissed by the Government.

In the same year Col. Broy established a new force attached to the Special Branch, to deal with the situation arising from the refusal of some farmers to pay rates during the period of the Blueshirt movement. The members were drafted to parts of the country (sic) where the no-rates campaign was in progress. They escorted bailiffs on cattle seizures and were involved in many violent incidents…he retired in 1938…and died on the 22nd January, 1972, aged 85… (from here.)


(*David Neligan was another poacher-turned-gamekeeper ; he was a particularly vicious Free State operative who ‘made his name’ in the fight against republicans in Kerry during the Civil War. His overall intention was to wreak havoc on the Republican Movement and he had no hesitation in turning his weapon on those he had once fought alongside.)

We have wrote about those ‘poachers-turned-gamekeepers’ before – here, and here, for instance – and, in time, there will be many other opportunities (and requirements) for other writers to do the same.

In its pre-budget submission launched in January 1989, the Simon Community demand that the issue of homelessness be treated as a political priority. At its press conference, Brian Harvey of ‘Simon’ described homelessness as one of the most avoidable social problems of modern times. However, because successive Irish governments (sic) have failed to adopt a practical approach to the issue, the problem has steadily worsened. Brian Harvey estimated the number of homeless people at between three to five thousand.

In their submission, ‘Simon’ have outlined a comprehensive programme of action for the homeless, including reinvestment in housing, a responsible level of social welfare payments, realistic help for voluntary organisations, adequate funding for community health services, an integrated system of housing benefit and the repeal of archaic discriminatory laws.


(END of ‘Simon Call For Immediate State Action On Homeless Crisis’ ; NEXT – ‘Women Aiding Women’, from the same source .)

‘SEÁN TREACY LOOKED DOWN WITH PRIDE’.

From ‘The United Irishman’ newspaper, November 1954.

On Sunday, 17th October (1954), the 34th anniversary of Seán Treacy’s death was commemorated at the cemetery in Kilfeackle, County Tipperary, in the presence of many of his old comrades. Comdt. Seán Treacy of the Third Tipperary Brigade led the first attack on the British forces in the ‘Black and Tan War’ at Soloheadbeg and, from then until his death in October 1920, his career was one of unceasing struggle against the enemy.

He had one purpose – to hit the invaders as hard and as often as possible, and he carried out that purpose relentlessly until his death in action alone against two lorry loads of British military and auxiliaries in Talbot Street in Dublin ; the street which is now well known by his name, in spite of some traders’ opposition.

On the morning of the commemoration an even more fitting tribute was paid in his memory – this time in Omagh, County Tyrone. The raid on the British military barracks was an action after his own heart ; he would have delighted in it, would have exulted in the chance once again to hit and hit hard the enemy occupation forces still in our land. We may be sure that Seán Treacy’s spirit looked down in pride and eager sympathy on the men who (after 30 years of futility) were once again getting down to the vital, fundamental issue – to get the invaders out, completely and as quickly as possible.


Thanks for reading, Sharon.