Back of 2009 Republican Calendar.

In the last few weeks of each year ,the Republican Movement issues a calendar for the new year : this year is no exception . The 2009 Republican Calendar features a series of hard-to-get and/or seldomn seen Republican prints and , judging by sales so far , looks set to become a collectors item . Priced at €5 each , these calendars are available from the local Cumann or paper-seller in your area or by contacting the RSF Office in Dublin (223 Parnell Street , Dublin 1 , fón 8729747) or the Belfast Office (229 Falls Road , fón 90319004) : so keep up-to-date with the Republican Movement and stay 12 months ahead of the ‘establishment’ – order your 2009 Calendar today !

FAT CATS : No money for our pensioners or for our school-kids , but €400 billion found for the Banks!

On Saturday , 6th December 2008 , Republican Sinn Féin held it’s monthly protest at the GPO in O’Connell Street , Dublin , in support of POW status for republican prisoners : half of the approximate thirty-strong group of protesting republicans stayed on that protest whilst , as pre-arranged, the other half joined-in with the 70,000-strong crowd that were protesting against State education cuts . The following five photographs were taken by an RSF member on that protest march – 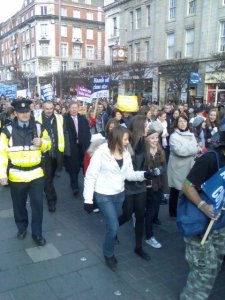 “Don’t punish our kids for your incompetence…”

School kids , parents and teachers – united in their demand: “No Education Cut-Backs…!”

“The development of the race depends on the development of the individual , and where self-culture has ceased to be the ideal , the intellectual standard is instantly lowered and , often, ultimately lost…”
(Oscar Wilde)
Congratulations and “Well Done!” to all those who took to the streets of Dublin on Saturday December 6th last , whether in protest against the Education cut-backs or to highlight the POW issue : both are honourable Causes!
Sharon.