THE FIANNA FÁIL STORY…….
The Rise And Decline Of Fianna Fáil , by Kevin Boland – Mercier Press.
Seán Lemass And The Making Of Modern Ireland , by Paul Bew and Henry Patterson – Gill and Macmillan.
By Roy Johnston.
From ‘Gralton’ magazine, Aug/Sept 1983.

On the whole , this is an unsatisfactory analysis of the period , unlikely to fuel the necessary synthesis of the national-democratic and socialist forces. It should , however, be bought and read for the partial insights it gives as it might stimulate a response from some marxist academic who understands what imperialism is all about and has some feel for the complexities of the Irish national question – if there be any such who has managed to survive with integrity the academic brain-washing machine.

” I did not have a 100% recollection of my conversation with the Taoiseach as I was a bit muzzy and bloody from the medical tests but I am quite certain that I told him of Captain Kelly’s prominent part in the Baileboro meeting with known members of the IRA , of his possession of a wad of money , of his standing drinks and of the sum of money – £50,000 – that would be made available for the purchase of arms.

I remember a conjecture of the Taoiseach as to where could they possibly get it and my suggestion that perhaps ‘Mr Y’ or ‘Mr Z’ , two millionaires of the TACA Group, might put up the money and the Taoiseach’s observation that those boys didn’t give it up easily.

In the aftermath of that discussion the Minister for Defence , Mr Gibbons , sent for Col. Hefferon , the Director of Military Intelligence , and questioned him about the Baileboro meeting and Captain Kelly’s part in it. Col. Hefferon’s versions are given extensively in his evidence before the CPA in Booklets No. 7, 8, 15 , 16 , 19 and 33 , while Mr Gibbon’s evidence which is contradictory is given in Booklet 24 , Paragraph 11150 : ” I am absolutely certain that I was never informed of the Baileboro meeting and that the reference to it in the Four Courts is the first reference I can recall…” and at Paragraph 11168 : “There was no question of a complaint from the Taoiseach that I can recall . Absolutely none…” “
(MORE LATER).

AN ENGLISH QUEEN IN IRELAND…..

……and speaking of (pro-) British gangs of marauders , we were unfortunate enough to be bumped into by this shower of armed thugs on Saturday , 7th May last , in O’Connell Street in Dublin , at the RSF-organised Hunger Strike Commemoration –

– and they will no doubt be part of the ‘queens own guard’ whilst she is amongst us , but you won’t recognise them ; they’ll be washed , shaved and suited (in more ways than one) for that particular job. 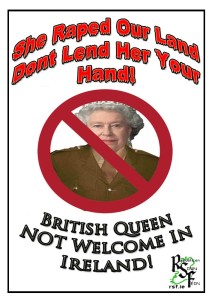 Assembly points for protests at visit of British Queen :

On May 17th Republican Sinn Féin will assemble at the Black Church, St Mary’s Place (facing Granby Row and the Maldron Hotel) in Upper Dorset St at 12 noon.

On Thursday May 19th in Kildare Town at 10am in the Market Square. 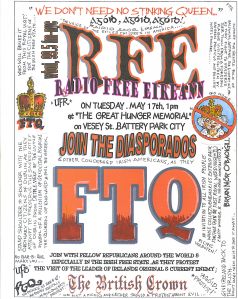 “Ireland’s exiled children in America will gather at the Great Hunger Memorial to help put the English Queen’s state visit in proper perspective. Brief vignettes of famine stories will be read to provide historical context. Instead of bouquets of flowers, she will be presented with a list of her crimes against Irish humanity. A piper will lead her to be judged by a jury of starving and exiled Irish men and women.
All over Ireland, protests are planned for Queen Elizabeth’s visit on May 17th 2011. Irish Americans who wish to show solidarity should join Radio Free Eireann at the Great Hunger Memorial at 290 Vesey Street and North End Avenue in Battery Park City at 1:00 p.m.”

And , staying on a U.S.-based theme , we want to remind our many readers in the States that the printed ‘Voice of The Republican Movement’ , the monthly newspaper ‘SAOIRSE‘, is available in America for $30 a year subscription (12 issues) by writing to the following address :
Saoirse
PO BOX 1396
Laurence Harbor NJ 08879. 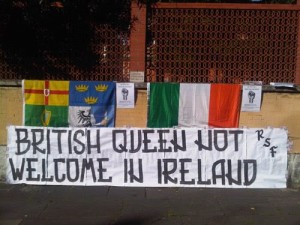 ….a wee mention for our friends in Italy who recently held an anti-‘royal’ visit protest in Rome – WELL DONE ! It’s heartening to see events of this nature being held by Irish Republicans and their supporters as it helps to remind a ‘new audience’ that , despite what some would have you believe , the so-called ‘Irish Question’ has not yet been fully ‘answered’ !