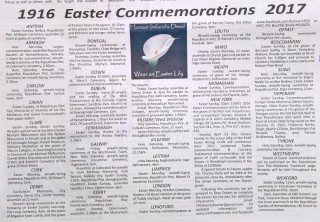 The main RSF Easter Commemoration in Dublin will be held on Easter Monday, 17th April 2017 – details here – but, if you can’t get to that one, then click to enlarge the pic (left) to get the details of other RSF-organised Easter commemorations, from Donegal to Cork to New York.

On Easter Sunday in Dublin, a wreath will be laid and the 1916 Proclamation will be read at the Éamonn Ceannt monument in the public park named in his honour in Crumlin (Dublin) at 12 noon and a commemoration will be held in Deansgrange Cemetery (which was established in 1861 and had its first burial in 1865) that same day at the republican plot, at 1pm.

300 ‘leaflet packs’ (pictured, left) comprised of, in total, 1,200 printed items of an Irish republican nature, will be distributed free of charge in Dublin city centre on Easter Monday at the above-mentioned commemoration at, and in, the vicinity of the GPO in O’Connell Street, on a ‘first up best dressed’ basis.

This blog will have a rep at each of the three events but, unfortunately, the ‘1169’ Finance Director (!) refused my request for time off (and funds!) to cover the New York commemoration, so excuse me if you come across a rather cranky female ‘leaflet-pack’-distributor in Dublin on Easter Monday…!