We had a wild time over the last few days :

:from Dublin to Wexford , where the Church ceremony took place , and then down the ‘Copper Coast’ road into Waterford , where the party continued : having abandoned the kids [and all sense of decency ;-)!] I did at least keep one of my fingers on the camera button !
We came across this beautiful monument on a wind-swept cliff top , where we stopped to stretch our legs – 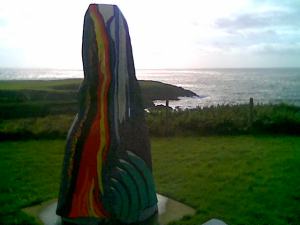 -with this inscription plaque at its base :

By now , our thirst was well quenched but the hunger was on us , so we went looking for somewhere to get a wee bit of grub – 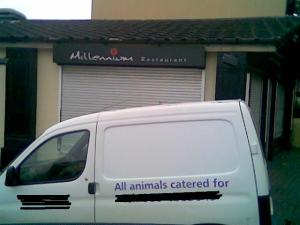 -but quickly decided to settle for a few more pints of cider and a bag of Tayto crisps instead !

On a more sombre note , we came across this IRA Memorial Plaque ,on that same Coast Road, dedicated to the memory of IRA Volunteer Jack (John) Cummins –
“Ballyvoile (6th June 1921)On the 6th June 1921, a military cycling column of about 30 men were ambushed at Ballyvoile. Tom Keating of Comeragh, a brother of Pat‘s who was killed at the Burgery was in charge of the ambushing party. It was first decided that the enemy should be attacked at Kilminion, near Stradbally, where the County Council quarry now operates. They lay in waiting for a time, but then received word that the British were returning by the lower Coast Road. The Volunteer party hurriedly made their way across country and had just reached Ballyvoile, when a volley of shots rang out. Evidently the (British) military had seen them moving into position. Two of the soldiers moved into higher ground and opened fire again, and this time, Jack Cummins of Stradbally was shot just as he was getting over a barbed wire fence. The Volunteers returned the fire forcing the (British) military to take cover.The fight lasted about half an hour and then the Volunteers had to withdraw due to lack of ammunition. A plaque to the memory of Jack Cummins can be seen at Ballyvoile…”

-where we said a prayer for the man , and for the many brave Irish men and women that followed in his tracks and that do so today.

Anyway … although we’re back , we haven’t got our usual ‘3-in-1’ post ready just yet , and have instead decided to post it next Wednesday (17th September 2008), as we need the time to concentrate on a major Republican raffle which is taking place this coming Sunday (14th) in a Social Club on the Dublin/Kildare border and also to prepare for the Annual Eve Of All-Ireland Rally in Dublin (Saturday September 20th next- pics and report on last years Rally can be obtained here)- 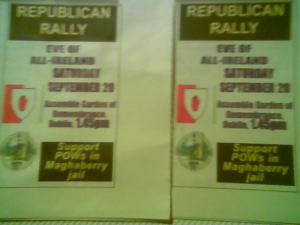 – so we’ll leave it at that for now , but will soon be back to ‘normal’.
Thanks!
Sharon.