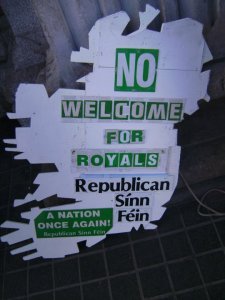 About twenty members and/or supporters of Republican Sinn Féin in Dublin held a ninty-minute anti-‘royal’ picket on the traffic isle facing the GPO in O’Connell Street yesterday , Saturday 26th February 2011 , and had set-up a stall under the pillars of the GPO to collect signatures in support of the motion that an English ‘queen’ is not welcome in Ireland whilst her armed forces continue to militarily and politically enforce a claim of jurisdictional control over any part of Ireland .

A Republican message from the steps of Dublin’s GPO to the English ‘establishment’. 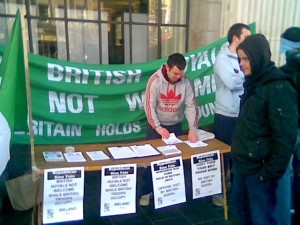 Hundreds of RSF recruitment leaflets and anti-‘royal’ visit leaflets were distributed over the ninty minutes , and dozens of signatures for the petition were collected , in what was a well-organised and well-executed ‘job of work’ by the Movement , which was well received by all passers-by , locals and tourists – indeed , the only objection came from the two members of the ‘Special Branch’ (Political Police) , who attempted to practically ‘close down’ the stall and , when that failed , contented themselves by trying to turn on-lookers away : however , that endeavour too , failed , so they retired to their car and observed proceedings from there.
Full marks to the twenty-or-so Irish Republican activists that carried-out this initiative and to Republican Sinn Féin for organising same – a good day’s work!
Thanks for reading ,
Sharon.